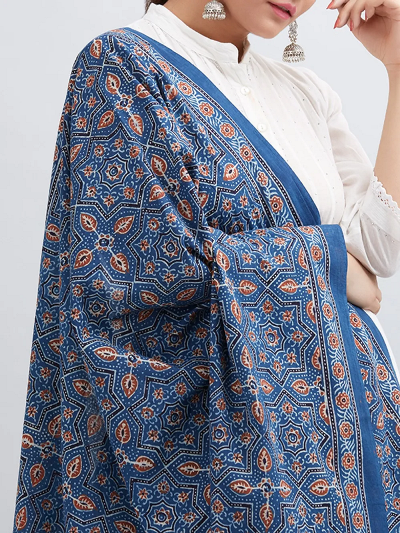 Ajrakh is derived from an Arabic word ajrakh meaning blue, after primary color. Ajrakh literally meant “aaj ke din rakh “or “keep it for today” because that is what the process is.

At every stage of the tedious dying process, the fabric should dry for three to four days. Nature plays an important role in the making of Ajrakh. Craftsmen work in total harmony with their environment, where the sun, river, animals, trees, and mud are all part of its making. Resist and mordant resist printing styles are used to print Ajrakh.

Motifs used in this print are dominated by geometrical shapes and use intense jewel-like colors of rich crimson and deep indigo, with black and white highlights. 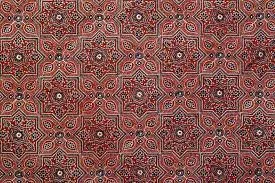 Ajrakh is one of the earliest types of block-printed textile in the world and is native to the land around the river Indus. The history of the Ajrakh can be traced from the times of the ancient civilizations of the Indus Valley, around 2500BC to 1500BC. The bust of the mohenjo-daro priest-king wrapped in a shawl which is decorated with a trefoil pattern (like a three-leafed clover) interspersed with small circles, the interiors of which are filled with a red pigment. The same trefoil pattern has been discovered in Mesopotamia, as well as on the royal coach of Tutankhamen. This pattern, which symbolizes the unity of the gods of the Sun, water, and earth, survives as the cloud pattern in the modern Ajrakh.

Ajrakh is still practiced in parts of Gujarat (Kutch) and Rajasthan (Pipad and Pali) in India, and in Sindh in Pakistan. The people of Sindh have a deep reverence for Ajrakh. From birth to marriage, until death, Ajrakh celebrates all significant events of the life cycle. 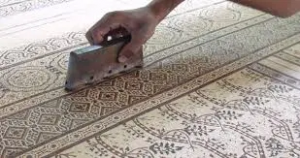 This craft is now declining as it is more labor-intensive and profit margins are also very low.

India is a land of many textiles, we have a vast variety to choose from. This was all about one of the Indian textile AJRAKH.